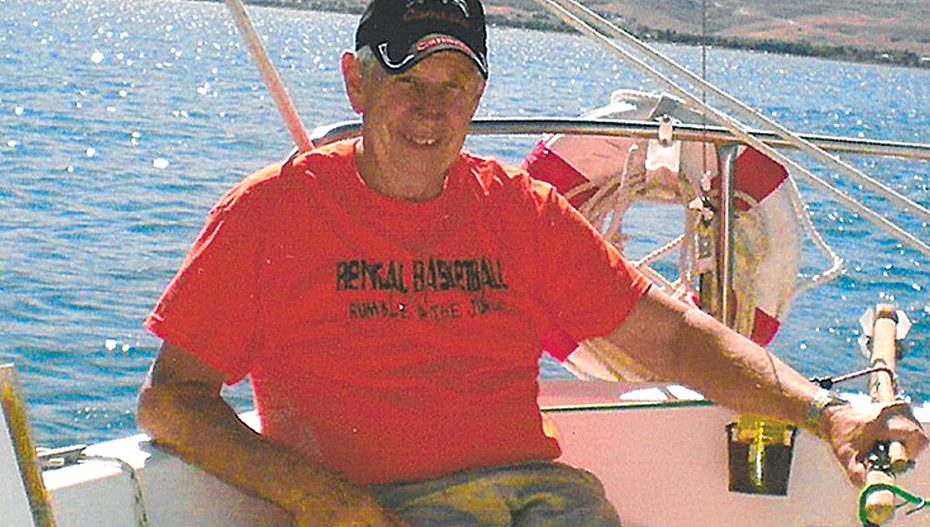 Who waits until retirement to take up the sport of sailing? A man who in boyhood “broke every bone in his body,” that’s who.

When the Korean War broke out, Carl Marler tried to join the Navy, but he flunked the physical. Childhood exploits, football, basketball, boxing, and an automobile accident had curved his spine. In the cheerful and determined style with which as a boy he had walked many blocks after school to weekly religious instruction, he trained himself to stand so no one would notice the curvature.

Then he enrolled in the Navy Reserve, soon to volunteer for active duty.

Service in the Navy

During his navy years based out of San Diego and Korea, Marler seldom knew exactly where he was, because on his LST (Landing Ship, Tank or “Large, slow target” as sailors call it) he was always below deck in charge of the ramp. He opened it halfway as the ship approached shore and all the way for the tanks it transported to exit to the beach.

Nevertheless, during his 32 years of active and reserve duty, he rose to the office of Captain and was Commanding Officer of four intelligence units, two right at home in Pocatello, Idaho and one each in Utah and California.

His service and consistent training qualified him to fly a Chinook helicopter under the direction of the pilot, command a light cruiser while officer of the deck—“you don’t steer it, you direct the crew”—and drive a nuclear submarine.

Marler, always religious, was usually the only sailor to leave the ship to attend church when in port on Sundays, whatever denomination he could find. Non-denominational services were held on board only before going into battle—two services, because half the crew had to be on duty.

Launching Into A Career

Home from active duty, Marler returned to work at Union Pacific Railroad where he had been first employed while still in high school. He soon married and switched to working full-time for AT&T while earning his bachelor’s degree in physics at Idaho State University.

When he graduated, AT&T offered him an advancement, but in Kansas City, Mo. His family did not want to leave Pocatello, so he quit his job. The career of a lifetime, as he put it, followed when he worked as a tester at the Idaho Nuclear Laboratory.

Marler had been testing his mettle all his life, and he loved his job as a tester. However, without his knowledge, the director of the development of nuclear power in the United States, Admiral Hyman G. Rickover, approved Marler as teacher of civilian personnel designated to work on prototypes at the Idaho labs.

Marler had no choice but to acquiesce.

He taught the class for 14 years, but did request and receive permission to do double-duty by also continuing his job as a tester.

His students had potential, arriving to his class with degrees in physics or engineering and GPAs of 3.5 or better. Two of them later became his boss.

He wrote some of the textbooks still used in that class today. Their subject matter is still cutting-edge physics and still classified. Penalties for disclosure are severe. He can’t even possess copies of his own textbooks.

After retiring, Marler and his wife, Bertha, built a summer home with a full view of Bear Lake, contracting the concrete work and framing to professionals but completing the four-bedroom, three-bath “cabin” with his own hands. He calls the A-frame section over his garage “the prow.” The two-story wing consists of a double garage with kitchen and living area above. Every level offers a panoramic view of the beautiful lake.

The couple lives at Bear Lake during the summers—except when one of their children borrows the summer house for a family vacation. They have two family reunions every year, when “the cabin” accommodates Marler and his wife, their five children and spouses, 23 grandchildren, and 28 great-grand-children.

Marler bought a small sailboat along with a book about its use and care.

“If you want to know how to do something, buy a book,” he said. After studying how to sail, he went to California for actual lessons. He then took a test to qualify for sailing craft up to 50 feet long.

He and Bertha eventually volunteered four-and-a-half years to church service in the Canary Islands, where they learned to speak Spanish.

Continuing A Life of Service

Upon returning home, Marler began volunteering at Pocatello schools, helping Spanish-speaking students with their studies—and urging them to stay in school.

Now approaching 90, Marler has a boat 22-feet long. He also owns a 28-foot Laguna, which he his restoring.

“He can’t possibly live long enough to complete it,” said Bertha, but according to Marler, the craft is sea worthy now.

Marler has proven his determination in more ways than one.

He was once caught in a storm on Bear Lake in his 22-foot sailboat, for example, when gale winds blew up from Logan Canyon. The only safe thing to do was ride the storm out.

Another time, the wind died, and the motor would not start. After trying the oars and finding them futile, Marler, always a strong swimmer, dove into the water and pulled the boat to shore.

Looking back, Marler’s ambition has been to live on a really big boat while sailing around the world, but for once, Bertha put her foot down.

So he settled for sailing off to Catalina, Long Beach, and Hawaii.

At his advanced age, he no longer sails alone. His son-in-law, an expert sailer, frequently joins him at Bear Lake, allowing Marler to continue this favorite retirement sport.

“Every day is a good day,” said Marler. “Some are just better.” ISI