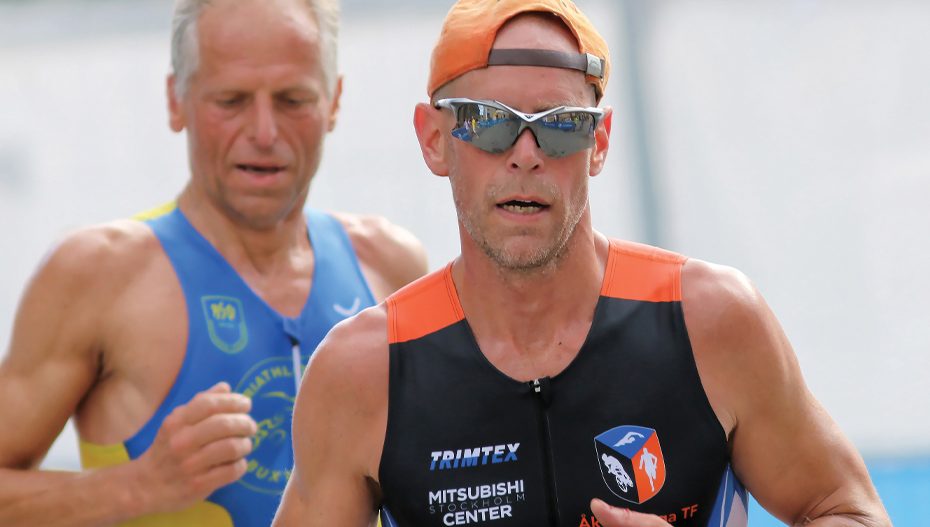 In 2012, Walter Fairfax was new to Coeur d’Alene, Idaho and decided to volunteer in the medical tent for one of the town’s signature summer events: the Coeur d’Alene Ironman. It consisted of a 2.4-mile swim, 112-mile bicycle ride, and full marathon (a 26.22-mile run).

“I remember thinking, ‘you’d have to be crazy to do that,’” said Fairfax, who specializes in internal medicine, pulmonary diseases, and critical care.

Whether or not she’d agree with that characterization or not, Peggy Stringer wanted to do exactly the same thing: participate in Coeur d’Alene Ironman, her way of turning something negative into a positive.

At age 50, she started entering triathlons, said the Helena native who grew up doing endurance equine events and fancied herself a Cypress Gardens-type water-skier as a girl in Texas.

Ten years later, she was in Helena’s Queen City triathlon when disaster hit in the form of a car.

Realizing she’d recover, she committed to doing the Coeur d’Alene Ironman in 2012—the year Fairfax volunteered in the medical tent—and won it for her age group. An accomplished swimmer, Stringer was 20 minutes ahead of the next closest competitor in her age group.

“It was a fun, exciting event,” said Stringer, who is a longstanding U.S. Master Swimming certified coach and National Champion swimmer who qualified for the World Triathlon Olympic distance in Vancouver BC. “It was the hardest thing I’ve ever done.”

Until the following year, that is, when Stringer competed in Ironman world championships in Kona, Hawaii. Coeur d’Alene is a qualifier event, meaning that the person with the fastest times for their age group gets first dibs on competing in the world championship. If she’d chosen not to go, the next fastest person would get the option and so on down the line.

And although she trained six days a week, acclimating herself to the heat by exercising with sweats on—in August—or in the sauna, she realized she couldn’t garner a win.

Instead, she focused on what she could do.

“Have fun, feel good, and finish whatever I’m working on,” said Stringer, adding that her triathlete days might be behind her.

Stringer has a while to decide if she wants to repeat the CdA Ironman full triathlon when it returns to Coeur d’Alene in 2021 after a seven-year hiatus.

The half triathlon has taken place at the end of June for five years running. And like he’s done several times since 2016, Fairfax will be at the starting line, one of roughly 20 percent of competitors ages 50 and up.

He hopes to qualify—as he has in the past—for one of 40 coveted spots to compete in the Ironman 70.3 world championships. He also hopes that, if his isn’t the fastest time for his bracket, whoever ahead of him chooses not to go.

In the meantime, Fairfax trains with 100-mile bike rides, swimming three times a week with the USMS group. He stays active year-round, from skiing in the winter to kayaking in the summer.

He has competed in seven half triathalons and two full triathlons in his 67 years on Earth.

It’s a far cry from his youngest days as a 24- or 25-year-old in medical school, when he regularly played football with friends. It eventually occurred to him that he hadn’t been that physically active for a long time.

He decided to try running, liked it, and kept at it, adding marathons—he’s done 22 so far, including the Boston Marathon three years ago—and multi-sport events.

In 1990, Fairfax did the Peaks 2 Prairie race in Red Lodge, Mont., running, bicycling and kayaking. Ten years later, he won the event.

One time, Fairfax took a bitter spill caused by another bicyclist, which sent him to the hospital with a broken collarbone and hip, leaving his bike in ruins.

Even as he was lying there, however, he felt grateful to be alive.

“I think the real thing is a sense of gratitude, ‘I’m still going.’” ISI