Making the Effort: Vaccination Rates on the Rise for Idaho 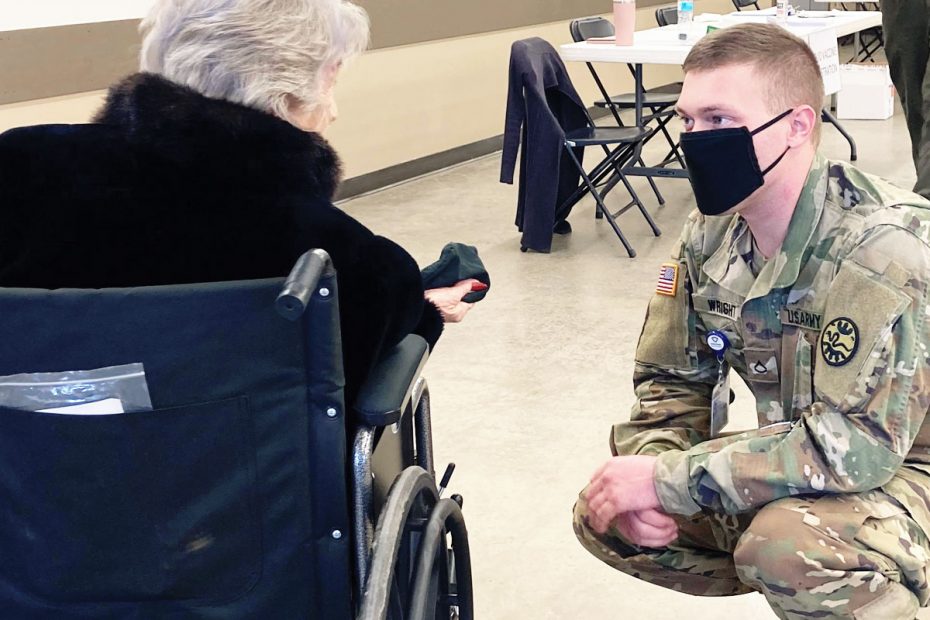 Part 2 of a Series on the COVID-19 Vaccinations

In many ways, Tom Cronin’s 48-year career in law enforcement helped prepare him for coronavirus. At 75-years-young, he wasn’t going to let the pandemic keep him from doing things, said Cronin, who joined his fellow Rotary Club members during an ongoing push to vaccinate north Idahoans since the beginning of 2021.

There, in addition to helping people fill out forms and directing traffic, he occasionally found himself as the temperature-taker of whoever was next in line. His special way of diffusing people’s anxiety involved humor and empathy.

When a male and female couple approached, for example, he’d take her temperature first, then turn to the man and say, deadpan: “Says she’s normal.”

The ensuing chuckle helped normalize the situation, said Cronin, noting that many people who came to the clinic, especially older folks, were very nervous, even shaking.

“It was so rewarding,” said Cronin, one of 184 active and honorary Coeur d’Alene-area members of the Rotary Club, whose motto is “service above self.”

She and her husband, Jack Riggs, who is a physician and former Idaho lieutenant governor, are both Rotary members. In December 2020, they approached the local hospital to offer Rotary’s services, with members serving a total of 3,400 volunteer hours.

The Club’s involvement with vaccination was a perfect fit because of Rotary’s 35-year history of helping eradicate polio, said Patano, a prolific community supporter, both locally and across Idaho.

Likely hoping it doesn’t take 35 years to eradicate COVID, many in Idaho have embraced the opportunity to inoculate themselves against the novel disease’s more devastating effects.

Beginning in January, 150,000 Idahoans were eligible to receive a COVID vaccine, including healthcare workers and long-term care residents and staff. By February, an additional 500,000 Idahoans, including Pre-K-12th grade educators, correctional facility staff, and folks 65 years and up, were eligible.

By March, eligibility had officially expanded to include anyone ages 16 and up with high-risk medical conditions. Unofficially, however, few people with an appointment are being turned away, according to social media postings and comments from people working at vaccination sites.

That points to a challenge Idaho has yet to overcome: COVID-19 vaccinations hesitancy.

Although roughly 68 percent of Idahoans age 65 and up are fully vaccinated, vaccination rates for those ages 16 to 64 are lower than 30 percent.

While some of the drop in shots administered may be due to earlier issues with the Johnson & Johnson vaccine, Idaho is already working to expand mobile vaccine sites walkup appointments, as well as support employer’s vaccination efforts.

A multi-pronged approach has been the key to keeping infection rates down and ensuring vaccine availability for members of the Coeur d’Alene tribe.

“At the start of the pandemic, the Coeur d’Alene Tribal Council established a task force made up of Tribal Council members, key tribal directors, leadership and medical professionals from Marimn Health, leaders from the Tribal School, and Coeur d’Alene Casino executives,” said Heather Keen, Director of Strategic Development at Marimn Health, which has a medical center, wellness center and youth and family recreation center serving both native and non-native populations in Idaho’s Kootenai and Benewah Counties since 1990.

The group reviewed data, local trends, and CDC science information and recommendations to develop health protocols, keeping the infection rate for members who live on the reservation to around 2 percent, said Keen.

“Ours was the first Casino in the country to reopen, and we were able to do so safely with a significant number of health protections in place to protect our workers, patrons, and the broader community,” said Keen.

In addition to being designated as a state provider for vaccines, the Coeur d’Alene are also celebrating the long-awaited opening of their new youth-focused Coeur Center, which they completed and opened last year.

“The Coeur d’Alenes care for the wellbeing of the whole person: mind, body, heart, and spirit. We have remained committed to this during the pandemic, and the opening of the Coeur Center is another example of the tribe’s continued commitment to caring for the whole health of the entire community beyond the pandemic.” ISI