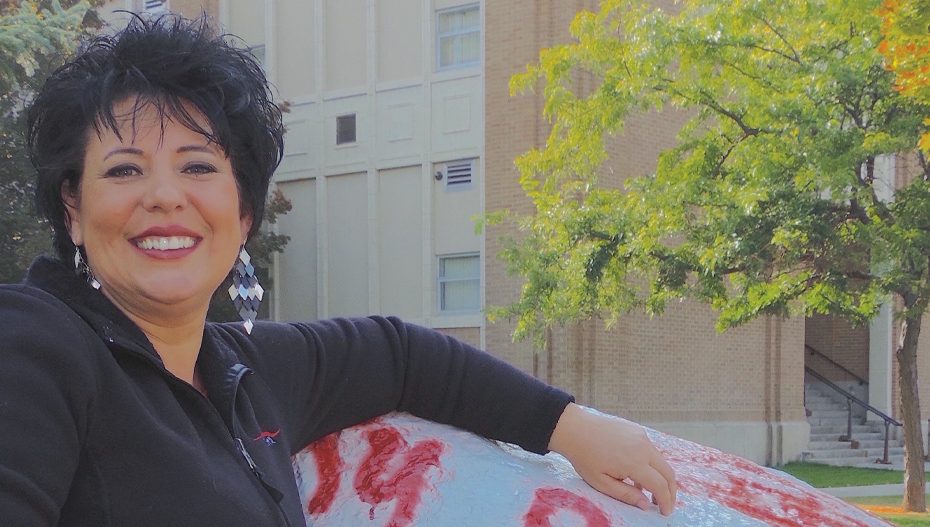 Recently while leading a paranormal tour of Pocatello High School in southeastern Idaho, she talked about janitors who loved the 127-year-old building and might still be lingering in spirit.

“We were standing in a hallway beside a bathroom, when suddenly the light inside turned on even though no one was in there,” she said. “Then all the toilets flushed at the same time. How do you explain that? It wasn’t a frightening experience at all. To me, it confirmed a janitor still cared about the building.”

“Ghosts don’t necessarily linger because they died violently in a certain place,” she said. “Some don’t want to leave and cross over to a peaceful spiritual realm because they were happy here or want to protect or be near a sentimental object, building, place, or person.”

During the past decade, Brian, 44, said she has come to realize ghosts abound, whether they are benevolent and protective or cranky and malevolent.

Long before the October tours, Brian and friends who founded Scientific Paranormal Investigative Research Organization (SPIRO) probe for ghosts in Pocatello’s historic buildings, to help them decide which ones to feature on their tours.

“Pocatello has so many buildings with activity that we’ve been able to go to different places every year,” she said. “This is our 11th year.”

“Many people come every year, because they want to see the new places we’ve found,” she said. “Some want to learn about our local history, and others just want to hear entertaining ghost stories.”

Some of the most unforgettable ghost stories and inexplicable events happen at Pocatello High School, ranked among the most haunted places in America, according to several paranormal organizations. Built in 1892, the campus sprawls across a city block in the heart of downtown. The high school was featured in an August episode of A&E’s Ghost Hunters.

A few years ago, a security camera videotaped a shadow moving in a hallway near a bathroom. It was posted on YouTube under Pocatello ghost.

“With the motion, I thought it might have been a former janitor sweeping,” Brian said. “Many staff members spent most of their working lives there and loved the building.”

While attending Idaho State University, Brian heard stories about the haunted high school. After graduating, she and two classmates, John Brian and Bret Yost, were brainstorming about ways to use their sociology and anthropology degrees.

“We thought of stories we’d heard about ghosts on campus and in older buildings downtown,” Brian said. “Cultures from around the world have ghost stories and different beliefs about them.”

Many cultures believe people are spiritual beings having a physical experience, and the spirit often lingers after death.

With all those beliefs and ghost stories in mind, they founded SPIRO in 2008. They set up a Facebook page and began investigating unusual phenomena.

“Local business owners started contacting us. They told us about hearing voices or slamming doors in empty rooms or seeing misty light or bluish orbs and wondered what was going on,” she said. “We’ve had clients from throughout the U.S. and abroad ask us to investigate unexplainable phenomena.”

From his experiences and investigations, John Brian wrote a book, Ghosts of Pocatello: Haunted History from the Gate City.

How do they detect ghosts?

They use K2 meters to monitor electrical fields, digital recorders that sometimes pick up sentences or words, and cameras.

“When we go into a building, we don’t want any background, so we won’t have preconceived ideas,” she said. “We ask questions in different rooms. After we analyze the recordings, we research the history of a place.”

For those who want to take a self-guided tour of popular haunted sites in Idaho, they posted a map on their SPIRO Paranormal Facebook page.

Pocatello’s Haunted History tours are scheduled Friday and Saturday nights, October 12, 18, 19, 25 and 26. Friday tours begin at 7 p.m. and Saturday tours at 6 p.m. On the final evening, a more extended VIP tour is offered. Tickets may be purchased through www.oldtownpocatello.com. Participants must be at least 8 years old.

Frightened Felons, a tour at the Old Idaho Penitentiary in Boise 7-11 p.m. Oct. 25 for all ages and Oct. 26 for adults only; tickets may be purchased at brown papertickets.com.

History, Mystery and Ghosts of Idaho Falls is offered June through October at ghostwalkidahofalls.com.