Idaho Shags: Tough, Loyal, with An Instinct to Herd 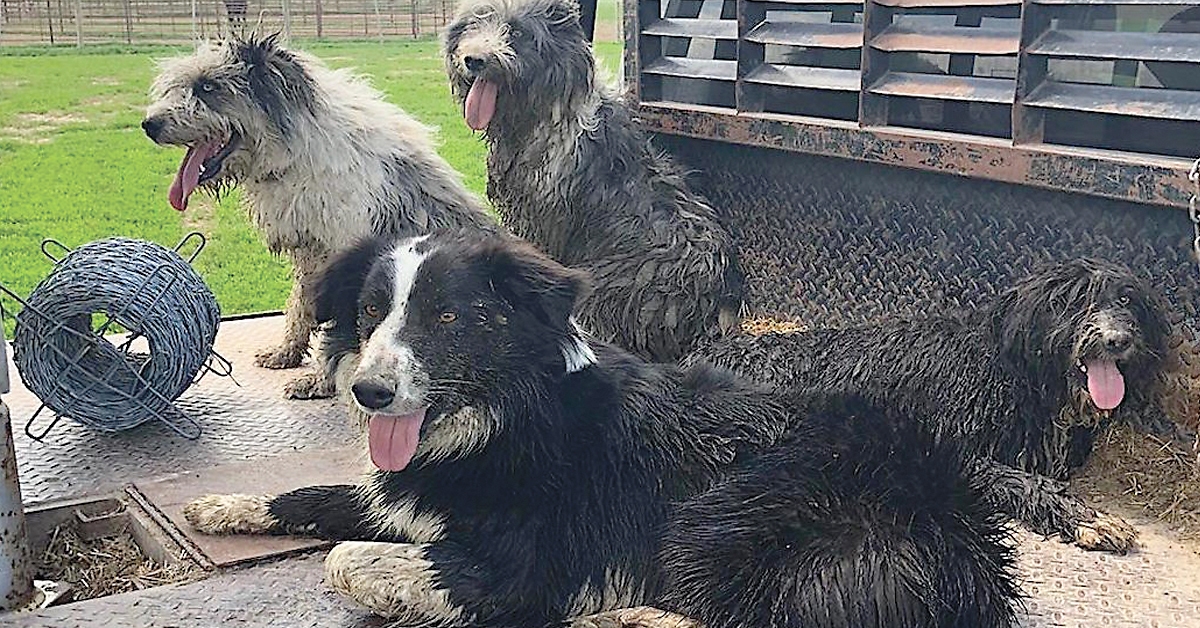 Idaho’s many marvels extend beyond its iconic landscape of Hells Canyon plunging 7,993 feet, the deepest river gorge in North America, or the Bruneau sand dunes rising to 470 feet, the tallest single-structured dunes in America.

Idaho ranchers boast of a native canine marvel. The Idaho Shag or fuzzy dog originated in the eastern side of the Panhandle state, although its exact origins are blurry. It sounds like a breeding accident with a blend of Airedale terrier, border collie, kelpie, or heeler.

A versatile working breed, the Idaho Shag is renowned for its stamina, herding intellect, and, most of all, its unmistakable scruffy appearance as if it had an accident with an electric fence that left its hair permanently frazzled.

At first glance, Idaho Shags’ motley comical appearance makes it hard to take them seriously. Yet after working with the dogs, ranchers and guides swear their loyalty to the breed.

Bill Fuchs, 59, who owns the Henry’s Fork Ranch, a cattle and guest ranch in eastern Idaho near Chester, became a convert about seven years ago. He and his son Tanner, 24, began breeding the Idaho Shag because they bought one and liked the dog’s personality and how she worked livestock.

Their size, about 40 pounds, may make some livestock not take them seriously at first.

“If a cow doesn’t respect Marley or looks at her the wrong way, she lets them inch closer to her for a sniff, then she grabs their nose,” Fuchs said. “It’s her way of telling a cow to respect her space.”

The family has sold their Idaho Shags nationwide. “We put ads on www.ranchworldads.com,” Fuchs said. “It’s amazing how many people are looking for that specific breed. They’re great working dogs and companions. They’re friendly, not huge, and love moving cattle. If they need to be aggressive with a stubborn cow, they’ll get right in there and get her moving.”

The puppies are comical to watch, he said.

“They have such a herding instinct they try to herd each other and are always wrestling as youngsters. They look so easygoing, but we joke they turn into Tasmanian devils at dinner, because they’re protective of their food.”

Their herding instinct is so intense that they need some direction.

“We have sheep here, too, and they want to herd them, but we teach them that sheep are not on the herd menu. Like all youngsters, they need an education. What makes them happiest is to go out and work cattle.”

Fuchs and his wife, Theresa, socialize the puppies, then their son Tanner trains them to work cattle.

Tanner said he prefers the breed because the Idaho Shags are gritty and have a lot of stamina.

“They really handle the weather well. The cold doesn’t bother them, probably because of the Airedale in them. They’re really loyal, too.”

Tanner said the dogs are versatile. “Some people have bought them to hunt coyotes and to tree bears. They’re energetic and like to have a job, so they can’t sit in the house all day.”

In mid-June, Marley had six puppies, while their other dog, Kate, gave birth to seven. “To keep the puppies affordable, we charge $300 each,” Tanner said.

Fuchs said at a recent branding in the Leadore area, most cowboys had an Idaho Shag. “That’s the breed they like to use up there.”

The scruffy 40- to 50-pound dogs are known as the Pahsimeroi Fuzzy in eastern-central Idaho, said Dr. Andrea Clifton, a veterinarian in Salmon.

“They’re awesome dogs,” she said. “I remember one named Fritz that was kicked by a cow and still kept working all day.”

They can be fearless, too.

“I’ve had some come in with porcupine quills. They learn quickly to leave them alone.”

She said the dogs are intelligent, protective of family, have stamina, and want to please their owner.

“They’re tough and have an instinct to work cows all day, yet they can come home and play ball with the kids in the evening,” she said.

Cowboys are loyal to the breed, Dr. Clifton said.

“Once they start seeing how they work, that’s the only breed of dog they want.”