Paving the Way with Solar Roadways 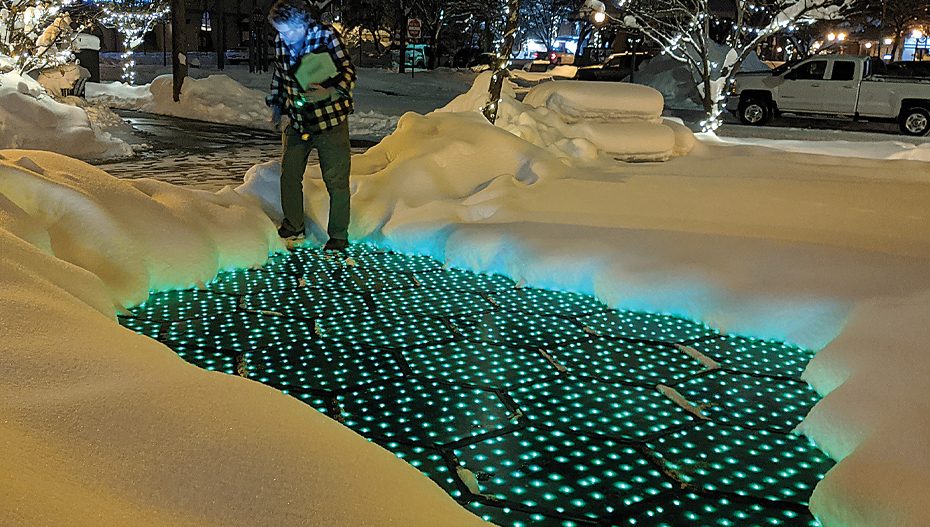 When we think of product development, we visualize labs at big corporations rather than small companies in rural America.

When it first occurred to Scott and Julie Brusaw that glass solar panels could replace the concrete and asphalt found across the country, they fully realized that they could change the world even though they were miles from big corporate innovation centers.

Julie first suggested the idea after the couple read Al Gore’s Inconvenient Truth, citing the world’s environmental problems. In the beginning Scott laughed at her idea, but within a week, they were in serious conversations about designing strong protective cases that would produce solar energy.

Researching the topic, they discovered that if all driving and walking surfaces in the United States were converted to solar, they could produce three times the electricity used in the country. After crunching numbers like these, great things started happening in the little town of Sandpoint, Idaho.

One of Scott and Julie’s first undertakings was to name their new company Solar Roadways.®

Scott, an engineer, left his day job and began dealing with the many challenges of making solar panels that would fit into parking lots, sidewalks, driveways, playgrounds, courtyards, tarmacs, and eventually roadways while Julie was an equal partner in working in the lab, making business decisions on product development and trouble shooting. She also kept them financially afloat by working in a private practice as a counselor.

Since their idea’s conception, they received three Department of Transportation (DOT) grants that enabled them to engineer and build prototypes, purchase equipment, and purchase a building for storage and construction.

They also got funding from a General Electric contest, Ecomagination, and from an Indiegogo campaign. Indigogo is an online platform for soliciting funds for an idea, charity, or start-up business.

In addition to creating solar panels that would power homes and businesses with clean, sustainable energy that would help to eliminate greenhouse gases, the Brusaws felt that these panels should offer other conveniences. LED lights embedded in the panels could provide flexible lines, signage, and even decorating options. As well, heating elements could melt off snow and ice.

To make this possible in a strong glass case, these two entrepreneurs had a vast amount of research and development ahead of them.

During the first six-month DOT grant life cycle, the Brusaws made a 12-foot-long panel prototype that they later called SR1, plus a 3’ x 3’ crosswalk panel with load sensors that communicated to the larger panel. With LEDs, SR1 demonstrated that panels would communicate with one another to create a message, such as “SLOW DOWN.”

With another two-year $750,000 grant from DOT, the Brusaws were able to build the world’s first solar parking lot next to their shop, using the new SR2 prototype. The solar-cell panels were hexagon shaped and approximately 31 inches from tip to tip.

Tempered safety glass, 10 mm thick on the topside and 12 mm on the underside, encased each panel that tolerated trucks up to 250,000 lbs. The topside was also textured to reduce slippage. The hexagon shape was determined best for managing curves and hills and dispersing the sheer force on roads.

All together, they made 108 panels. Some were half- and quarter-sized, providing for even installation along the edges. The project also included a cable corridor storing electric cables, so electrical lines could be installed in the future. The project was completed in March 2014.

In June 2014, Scott and Julie were invited to the White House for the Maker’s Faire, where President Obama spoke. The year was capped off with their project being selected as one of the year’s 100 Best Innovations by Popular Science.

In 2015, they developed the SR3 panels. These panels were designed to last a minimum of 20 years. Solar cells are the limiting factor: they can continue to work up to 30 years, but they are less efficient toward the end of their life cycle.

While the SR2 panel was 36 watts, the new SR3 panels were 44 watts. The solar cell coverage was increased by 25 percent by eliminating mounting holes and replacing them with side connectors.

Also, in 2015, they completed research and moved the company toward road and highway installations. The company installed a 150-square-foot display of hexagon-shaped glass panels in Sandpoint’s downtown plaza. The panels have an on-board microprocessor controlling the heating system and the LEDs’ intensity.

Maintaining a temperature above freezing, the heating system keeps the area free of snow and ice. With five separate LED colors, 16 million possible shades provide the customer with many color choices and will replace paint used on roads.

The Brusaws will soon make an installation at the Inner Harbor in Baltimore, Maryland, using the latest SR4 technology. Future projects include walkways and parking lots.

“We have always planned that roads would be our last application,” said Scott. “When we do venture onto roads, we will probably begin with crosswalks that will showcase the many safety features in the panels.”

When Julie and Scott get back to creating panels for highways, they will return to adding pressure sensors they had experimented with for the SR1. This would warn drivers about anything destructive in the road ahead, such as wildlife, boulders, or downed trees. They will also return to addressing storm water that washes over surfaces, which is an environmental problem.

The owners of Solar Roadways® have suggested mitigating this problem by retaining the filtered storm water in a tank below the frost line within the cable corridor, where it could be pumped to any location.

It has been a lengthy struggle, but the Brusaws are now reaping the rewards of the long hours, worry about financing, and product development. No doubt challenges remain, but they are, at last, seeing the fruits of their labor with each installation.  ISI

Solar Roadways® welcomes interested customers who want to see functioning panels in the Sandpoint downtown plaza and at Brusaws’ shop. Purchase orders for homeowners who want to install the panels on patios or driveways will soon be available. Those who would like to be on the notification list or to schedule an appointment can email the company at [email protected]