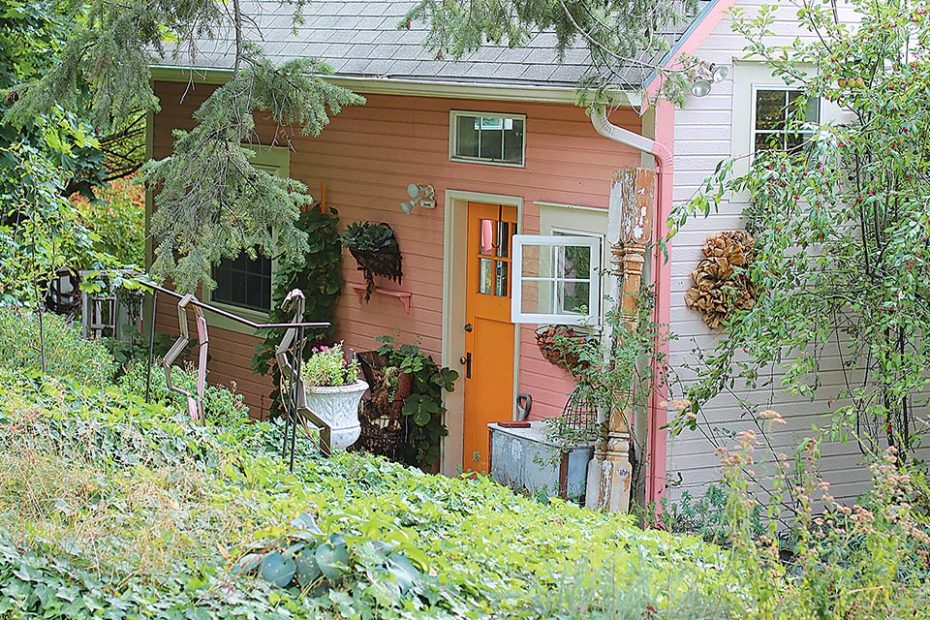 By Carrie Scozzaro
Farming, community, family. That’s the motto for Genesee, Idaho, halfway between Moscow and Lewiston, to the south in mostly rural Latah County.
Like many surrounding towns on the Palouse, an expanse of farmland known for its wheat and legumes, Genesee is a throwback. A handful of businesses, a senior citizen center, American Legion, farmers co-op, and about the same number of churches as youth-oriented 4H and related organizations for its 300+ school-age population.
What sets Genesee apart, however, is the Little Pink House Gallery, an unexpected gem from an equally unconventional lady who turned personal loss into something beautiful.
“I came off a few rough years—losing my position at a local college, also losing my mom and a divorce,” explains gallery founder and artist, Ellen Vieth.
The building for the gallery was actually a shop behind the home she shared with her former husband, where the couple raised their children since relocating from Chicago in the ‘70s.
Falling in love with the West was an easy thing to do, says Vieth, but making a living less so. The 135-year-old home they found turned out to be ideal, though, on several levels.
“It’s a beautiful space that was developed for my floral design and event business,” says Vieth, who ended the business in 2002, but kept the house and shop. She moved away, eventually attending the University of Idaho where she earned first a bachelor’s in art then a master’s in her early ‘40s.
Friends convinced her to return to Genesee and to the house that needed a lot of work.
“It actually was just the focus I needed after so much loss,” says Vieth, who launched Little Pink House Gallery six years ago in the single-story shop with the pink siding and pumpkin-colored door. It’s tucked into the slope behind the house and framed by all manner of trees, bushes, flowers, and lush greenery—the perfect synthesis of her dual passions of art and gardening.
She features regional artists there with three to four curated exhibitions per year, like Joe Casey Doyle, an associate professor of arts at UI, who recently won an Idaho Commission on the Arts’ 2020 visual arts fellowship.
Vieth also exhibits her own work, which is inspired by her own experiences, of course, but also the greats: Impressionists, Abstract Expressionists, Modernists, and specifically Wolf Kahn, Richard Diebenkorn, and Joan Mitchell.
“I work in many mediums, including flowers,” says Vieth, who maintains a studio space in town where she also exhibits her work and that of others. “They all have their strengths, and being able to push some limits is where I want to be as an artist.” ISI
For more information, visit Facebook: LittlePinkHouseGallery and Facebook: Studio84Gallery.