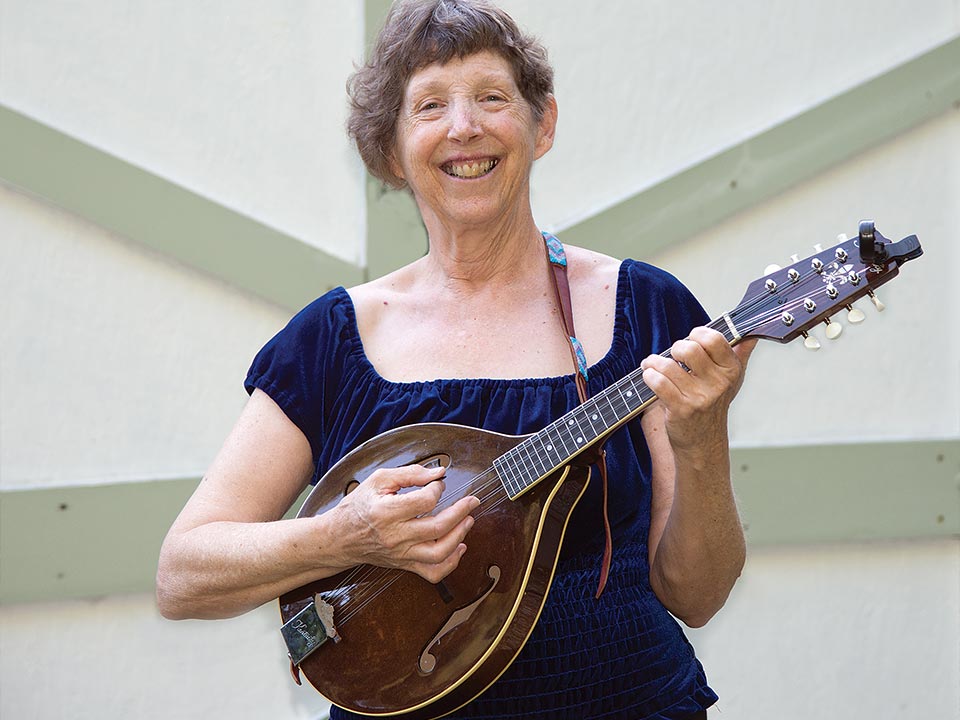 What happens when a senior musician suddenly loses all her gigs to a pandemic. If you’re Wendy Matson, you write a song about it.

Matson, who turned 70 in June, was playing solo concerts to seniors in Boise-area nursing homes when Covid-19 began to run rampant.

She was playing four gigs a week, alternating with about 13 area nursing homes, when the bad news struck: With seniors being among the most vulnerable to the disease, nursing homes naturally were among the first to shut down to outside visitors.

She also lost any further chance to be singing with Common Ground Community Chorus this season after Covid caused the canceling of all rehearsals and performances through the fall.

Wendy sang first tenor with the 50-plus-member chorus for three years and has performed solo folk pieces with the group in concert. She hopes Covid-19 will recede quickly, so she can resume rehearsing with the group when it gathers in the fall.

After adjusting to life without most of her income, she wrote the song, “Hello From a Distance” in April, in about 30 minutes. The title phrase popped into her head while hiking in the Bogus Basin area, and she wrote an a-cappella version before putting the tune to her mandolin.

Here is the first verse:

Hello from a distance, stay safe and healthy, please.
The Plague of 2020 brought the whole world to its knees.
Thought we all were separate, what kills you won’t kill me.
We thought walls would protect us, but bugs don’t have no boundaries.

Other lyrics delve deeper into the consequences of the pandemic’s spread.
She finds much of her songwriting inspiration while hiking, swimming, or otherwise immersing herself in nature.

“Nature is my muse,” she said. “Some songs come easily, others do not, but I’m always excited and happiest when writing songs in nature.”

The lyrics for “My Caribbean,” another tune she said “wrote itself” in 2019, came to her while she was enjoying a refreshing swim in a local, secret swimming hole with her dog, MacGregor. The song reaffirms her life choices, without apologies:

I may not have money in a 401(k)
or stocks in the market, don’t trade by day.
But I know a place where I can go
Just me and my dog, all alone
A beach for two, water clean as a pool
My Caribbean, my Caribbean.

“Most of my friends are well off financially,” she explained. “I chose to be an artist, and can’t afford cruises like them. But I chose my life and I have no regrets.”

Later this spring, despite the volatility of Covid, she managed to get back to performing for one group of nursing-home facilities with six locations. She’s allowed to play outside to small audiences for one hour a week, rotating through the locations throughout the months.

But that’s not all she has in the works.

She has released five CDs over her career and is preparing to record a three-song music video of her original work, written for vocal and mandolin.

She also continues working on her Best Friend Project, as an advocate for the welfare and responsible care of companion animals through her music.

Matson said she has enough tunes written to record at least another full-length CD of songs related to the bonding between humans and animals, mostly dogs.

“My 12-song animal story collection will be my next project,” she said. The songs relate stories of loving bonds between animals and humans. Once recorded, she plans to give portions of CD sales to the Idaho Humane Society to help shelter animals.

Matson’s love of dogs runs deep. MacGregor, who is a border collie/blue healer cross, accompanied her as a therapy dog for four years when she played at Veterans Administration facilities in Boise.

Before him, Matson’s black lab/German shorthair, Mocha Bean, accompanied her for 12 years at the VA.

“They were the headliners,” she said. “I was the backup band!”

She played concerts for veterans in the federal VA facility in Boise for 17 years, and for the state facility for four.

The singer/songwriter, who plays acoustic guitar and mandolin, creates in the storytelling tradition of Woody Guthrie, Bob Dylan, Joan Baez, and others. She also touches on country music and tunes inspired by the Beatles.

The latter, she said, are her top teachers of songwriting, with their short, hook-filled melodies and words.

“The goal is to stick in people’s minds a memorable tune to hum to, snap your fingers to, sing the words to,” she said, while making her songs clear and concise.

“Lyrics take the longest for me; music mostly comes out whole,” she said.

Every song doesn’t write itself, of course. Some have taken her years to perfect.

“When I get a song written to performance level, I always cry,” Matson said. “That tells me the song is ready to perform. But songs are living things: they evolve over time. I may change a word or a note 30 years after writing a song.”

She’s a stubborn perfectionist when it comes to writing performance-worthy music.

“I take great pleasure in making every song I write the best it can be,” she said. “I don’t write throwaway songs.”

Matson toured in concert from 1982 to 1995 with country rock variety dance bands.  In 1992, singing harmony and playing bass with the Bobby McGee Band, she performed on a Department of Defense tour of U.S. Air Force bases in Guam, Hawaii, South Korea, and Japan.

“I greatly enjoyed playing in bands all those years. Learning other people’s songs helped me learn to write my own,” Matson said. “These days, I’m interested in doing my own material, and I have about four hours’ worth.”

She’s ready to share much of that material in concert. For more details about her, visit wendymatsonmusic.com. ISI