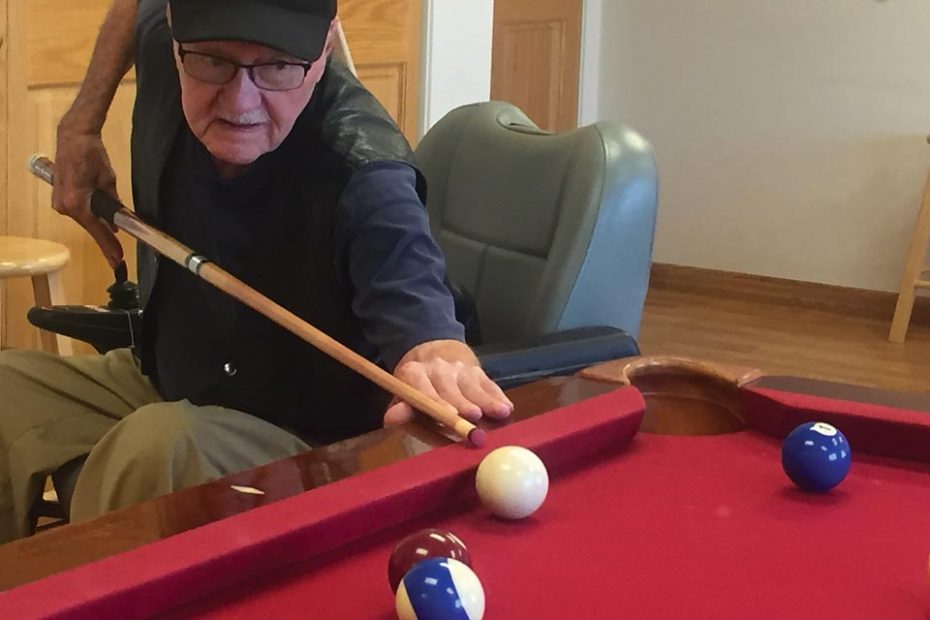 Update Dec. 1, 2020: Since the time of this writing, the Jerome Senior Center has closed its doors for the foreseeable future, due to COVID-19.

Balls aren’t the only thing being “racked up” in the billiards room at the Jerome Senior Center in Jerome, Idaho. So are the laps Gerald Ostler takes around the pool table in his red Jazzy Power Chair. It’s why Ostler makes sure he’s got a fully charged battery each morning before he leaves his house for the Center. Not only does he need to make a round trip there from his house, but he’s got a whole lot of pool to play each day.

They’ll play nonstop games of eight-ball with a designated “rabbit” until a fourth man comes in for two-team play, maybe Kelly or Jesse, sometimes Hugh, or another Bill. Even the center’s chef, David, comes in to spice up a game between meal prep duties. These gentlemen play all day, breaking only for lunch.

And once a week, I’ll come in. I’m his daughter, whom he affectionately calls “Red.”

Ostler, a widower, first ventured into the Senior Center about six years ago, to get himself out of the house just for something to do. He visited at lunchtime one day and found it to be a pleasant place. The food was good, and the staff and members friendly.

Ostler says he doesn’t remember exactly when he motored into the billiards room after that first day, but eventually, out of curiosity, he checked it out and watched some pool games. It didn’t take long to join in. The healthy obsession had begun.

A billiards room isn’t necessarily set up for motorized wheelchairs, but fortunately, there’s enough room between the two pool tables for Ostler to navigate around without running over anyone’s feet. Actually, billiards or pool is one of the great sports that one can actually play sitting down, and even excel.

Almost 20 years ago, Ostler was diagnosed with a rare inflammatory muscle disease called Inclusion-Body Myositis. It is a gradual onset of progressive weakness and wasting of the skeletal muscles, attacking first the legs, arms, fingers and wrists.

Over time the muscle mass in these extremities all but disappears, and to date he cannot stand, lift a foot up off the floor, or make a fist, much less bend his fingers. Regardless, he’s all finesse with a toggle switch, and he can hold a cue stick. And man, can he shoot some pool.

“I would study the other guys’ shots, and then I’d replicate ‘em,” he says. It took awhile to get a rhythm, and he was fair in the beginning, but he has an eye. With daily practice it didn’t take long before he was clearing the table on one turn, or banking the eight ball in from one end of the table to the other. A common echo now from the others is, “I wish I could bank shots like Gerald.”

When it’s Ostler’s turn, he powers on his chair, cue stick in one hand and the other hand on the toggle, and maneuvers himself around the table to the shot he wants to take. He spins the chair deftly into position, adjusting the chair minutely yet exactly, his eyes determined and concentrated.

Sitting, he’s at a perfect level for sighting the ball and sometimes gets jabbed that he has an advantage. As if. He’s holding a cue stick he can’t bend his fingers around. But there’s no doubt he has a feel for the game.

“For success, it depends on how the balls lay,” he says. He admits it can be difficult positioning himself for that one sweet shot. Shooting the cue ball over another ball is definitely harder for him from a sitting position. When asked what shots he most enjoys, he replies, “Being able to make the shots that are challenging, where you have to use the rail and bank ‘em. That’s a lot of fun to make those,” he says with a grin. It’s not unusual for him to bank five shots in a row.

For those long shots requiring a bridge stick, a friend made him a portable bridge tool with a leather handle, so he can lift it up and set it into position on the table with his own cue stick. He keeps it in the side pocket of his chair.

He doesn’t like to miss a shot, either. “Now, why did I do that?” he says, frowning in frustration when it does happen. Ostler is a perfectionist and a competitor.

The challenge of competition fuels them all. They’ve formed a great bond of shared camaraderie, faith, and friendship. Some have come and gone, some have passed on. They learn from and watch each other. There’s a lot of joshing and ‘sharking.’ The banter is incessant because they all have their quirks.

Ostler remembers that after his granddad retired from farming he would go into town every day and play the game of Snooker, a variation on the pool game, using 21 balls. Ostler only watched. But when he was in the Army stationed at Fort Belvoir, Va., in 1957, he learned how to play pool with the chief head cook.

They played every day for three months while he was there. Ostler has since taught the game to his grandkids who happen into the Senior Center from time to time when they visit.

A Jerome native, the now 85-year-old was an upholsterer by trade, which was never better seen than in his detailed work with a sewing machine and a staple gun. He also owned and operated the local ambulance business for years, was elected to the City Council, and eventually became Mayor of Jerome.

Whatever he put his mind to, he did well, whether it was playing his fiddle, water skiing, snow skiing, shooting trap, or pitching horseshoes.

His shelves are lined with the trophies of success. But that was before the disease took hold. Now, confined to a wheelchair, he has still managed to find a competitive outlet at which he can excel with his keen eye. The best part—he’s racked up new friends as well. He says he would be lost without the Senior Center.

Back in the pool room, a cell phone interrupts someone’s turn, and they all wait (a little impatiently). They toss around a bit of snarky talk and joshing about technology and who has or hasn’t adapted. Then, “The 5 might bank if you can get it past the 7,” someone interjects.

When I first visited the pool room to watch my dad play, he said, “Pick up a stick and give it a try.” That wasn’t a choice. All these years later, my weekly visits have turned into coaching sessions.

Then, “If I was shootin’ that, I’d play it from the corner right there,” he instructs, pointing. “And Red, shoot it straight.” ISI

UPDATE: Though disappointed with the temporary closure of the facilities, Ostler is optimistic, and remains ever positive, through his faith, family support, friends keeping in touch, and the ability to attend his church—at least for now. For updates on the reopening of the Jerome Senior Center, visit jeromeseniors-com.webs.com.