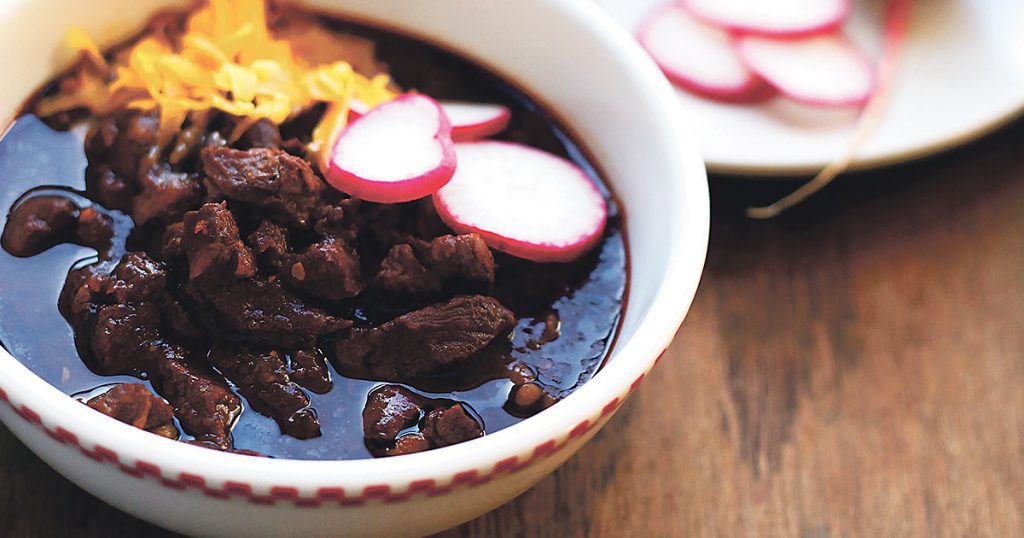 Texas chili is the stuff of legend. Some people refer to it as chili con carne, but in Texas, it’s just called “chili.” The “con carne” part is a given.

For that matter, the “Texas” qualifier is redundant as well. Texans proudly refuse to entertain the idea that other styles exist. Given that chili was invented in San Antonio, it’s hard to debate them on this point.

Birth of the Texas Chili Project

Like most Americans, I grew up eating chili. It was sort of a meaty stew made with ground beef, canned tomatoes, kidney beans, and lots of “chili powder” that came in a tin or jar from the spice section of the grocery store. This was, I would later realize, quintessential Mid-Western-style chili.

No self-respecting Texan would recognize this hearty stew as chili.

I was married once to a vegetarian hippie gal. In that era I made vegetarian three-bean chili. It had a lot of allspice and cider vinegar in it, and it was fantastic. No self-respecting Texan would call this stuff chili, either.

I’ve sampled chili here and there over the years all over the country, and I’ve found the quality to vary from disgusting (that runny, greasy ground beef glop they slather on “chili dogs,” which is technically chili con carne), to mediocre (bad Tex-Mex restaurants), to absolutely sublime (made by proud chili snobs).

A few years ago, I decided I probably ought to figure out how to make it like they do in Texas.

I researched and experimented and made a lot of chili until I settled on the recipe I’m sharing with you here. Before we get to that though, let’s look into this chili stuff conceptually, culturally, and historically.

An entire culture and ethos exists around chili that is in many ways similar to barbecue culture. There are rules, methods, arguments about what makes it great, and closely guarded secrets. Chili masters compete fiercely in contests for first-place bragging rights in much the same way that barbecue pit masters compete.

Conceptually, it’s a simple dish: a kind of thick stew-like concoction made from dried chili peppers (ground into a powder, or reconstituted in hot water and pureed) and beef, slow simmered until it’s melt-in-your-mouth tender. That’s chili at its essence.

Surely, it also has a few other herbs and spices (amounts and types varying recipe to recipe), probably some onion and garlic, maybe an acid (vinegar) or a sweetener (brown sugar), and perhaps (although not necessarily) even a bit of tomato product or a pinch of masa as a thickening agent. That’s pretty much it.

Of course it’s the infinite variability of these ingredients that complicates the game.

Notice that beans are conspicuously missing from the list. That’s right, hippies. No beans. This is actually a big deal, which brings to mind a favorite Texas pastime: when they aren’t remembering the Alamo, or talking about how much bigger stuff is where they live, Texans absolutely love to act horrified by the suggestion that it’s somehow acceptable to put beans in chili.

While you can get away with taking some license here and there, chili simply has no damn beans! End of discussion. It’s a specific rule unto itself.

And while we’re at it, you don’t eat chili over spaghetti with cheddar cheese and raw onions,  like  the  folks  do  in Cincinnati  (unless,  of  course,  you’re in Cincinnati).

The History of Chili

Cooking with chiles, meat, and herbs was certainly not unknown to Inca, Aztec, and Mayan culture. However, from what I’ve been able to discover, the dish we know as chili con carne originates with the “chili queens” who served it food-cart style to working men in San Antonio’s Military Plaza as early as the 1860s.

Eventually, chili caught on as a popular cattle trail food, and cowboys spread the chili gospel until “chili joints” serving up a “bowl of red” popped up all over the American Southwest.

It was the 1893 Columbian Exposition in Chicago (i.e., The World’s Fair), where Texas operated an extremely popular San Antonio Chili Stand that helped introduce chili to other parts of the U.S.

Soon people were putting it on hot dogs, hamburgers, French fries, omelettes, and spaghetti, substituting tomatoes for the chilies, and yes, sometimes even adding beans and elbow macaroni (chili mac). Over the course of the 20th century, chili took on all of the weird regional variations we know today.

Some Observations About Texas Chili Recipes

In my quest to develop a decent, authentic Texas chili recipe, I’ve noticed a few things that are…disappointing. This is the section where I probably stick my foot in my mouth and get in trouble with certain Texan chili aficionados.

Hamburger—First, I was curious to find out what cut of beef was popular in Texas chili. It could have been brisket for all I knew (some folks do use brisket). Most recipes I see, however, are made with sirloin or chuck roast or tri-tip roast, or a roast I’ve never even heard of called a “blade” roast. But here is where it gets strange.

While some chili recipes council cutting the meat into small cubes (the size varying according to the preferences and logic of the author), I’ve noticed that a lot of chili recipes begin with ground beef. Granted, they stipulate “chili grind,“ which differentiates itself from ‘hamburger’ by being a coarser grind. Maybe this is a Texas chili faux pas, but this just seems wrong to me. I don’t care if it’s “chili grind;” you’re making hamburger soup. I’d rather have a chili with a slightly more stew-like texture. Granted, it’s more labor intensive to dice three or four pounds of beef with a knife, but I think it’s worth it.

Packaged ingredients vs. using a mortar and pestle—Cooking from scratch is what distinguishes cooking as an art from from “throwing something together for dinner.” Photo by Steve Heikilla.

Packaged or processed ingredients—I’ve noticed that some award winning chili recipes are made from various packets of purchased and prepared chili powders and spices mixed into a pile of hamburger meat. I’m thinking here primarily of CASI (Chili Appreciation Society International) competition chilies.

While I’m sure some people who know their chili produce these concoctions, I just don’t think dumping a mixture of store-bought powders into a pot is really cooking. Where’s the mortar and pestle? Where’s the knife and cutting board? Where are the dried chilies?

I can appreciate that this is largely a complex chemistry experiment, and getting the blend and amount of packet ingredients takes a lot of patience and meticulous trial and error. But just like the “chili grind” hamburger, this just seems wrong. I’m a “from scratch” kind of guy, because I think the artistry, care, and attention to detail are reflected in the quality of the end product. You can taste the love. Cooking from scratch is what distinguishes cooking as an art form from “throwing something together for dinner.”

This being the case, I’d prefer to roast and grind my own spices when I can. And instead of chili powders, I prefer to buy whole dried chili pods, stem and seed them, re-hydrate them, and grind them into a paste. This is cooking, right?

Goya Sazón—I’ve noticed a lot of chili recipes have Goya Sazón in them, which is a seasoning bouillon cube that reputedly imparts a “Latin American” quality to foods (whatever that means). It consists mainly of MSG and also has coriander, annatto, garlic, salt, and tricalcium phosphate. It pops up in recipe after recipe.

I tried it in a batch and didn’t care for it. It adds a metallic, chemical aftertaste to the chili. In fact, it’s really awful. I expect that some people grew up with it, and it has a nostalgia associated with it. I recommend skipping it.

The Matter of “Dumps”—I’ve also noticed that the timing of adding certain ingredients appears to be significant, at least to the competition chili cook. All of those spice mixes and chili powders are divided into “dumps,” which are added at various stages of the cooking.

I read one explanation stating that ingredients like coriander or cinnamon can burn, so you want to add them later. That makes a certain amount of sense, I guess. But some of these dump divisions seemed like alchemy to me, like something a Shakespearean witch would find important when adding eye of newt and Wolf’s Bane to a cauldron of witches’ brew.

I did hold back the sugar and the acids until later, but I didn’t obsess too much about the timing of ingredients.

In the end, I learned that “competition chili,” with its refined packaged powders and aversion to fat (not kidding) that might pool in the surface and offend a judge, just doesn’t fit my more rustic, scratch-cooking ethos. So the chili I’m sharing here reflects that ethos. I hope you enjoy it.