Give Hard Water Fishing A Try 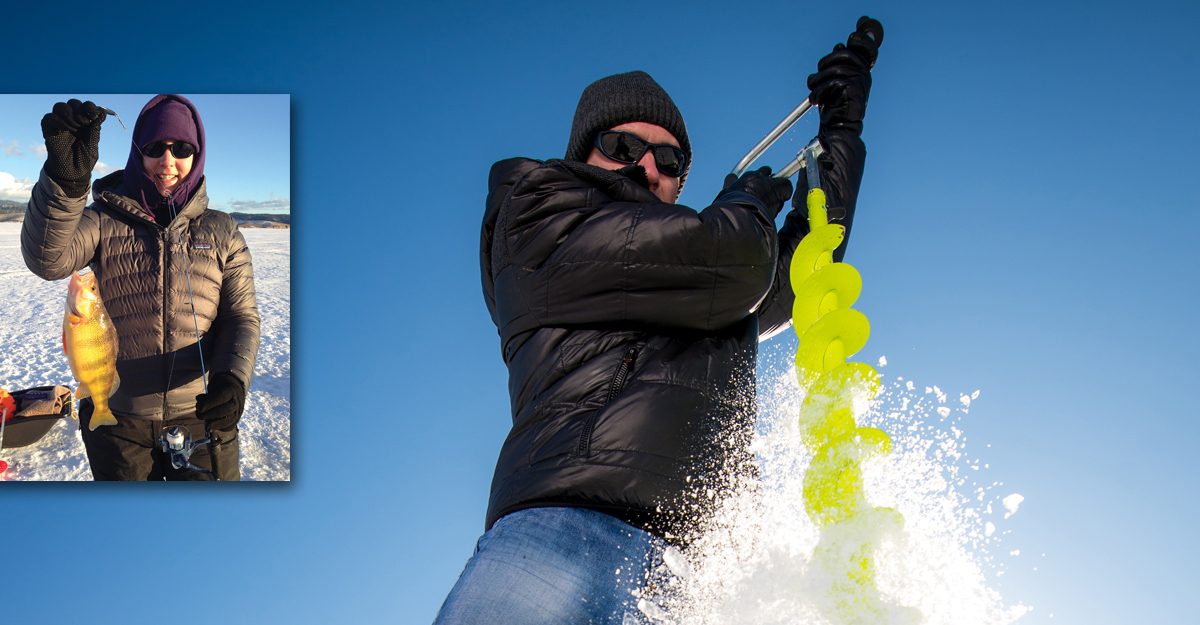 Photo Courtesy of the Idaho Dept. of Fish & Game / agnormark/BigStock.com

My dad’s ice auger hangs in our barn, a reminder of days gone by and time well spent fishing in the winter as a kid. But for some reason, that time-honored pastime fell by the wayside over the years. This winter, however, I intend to return to my roots and spend time fishing on hard water.

In Idaho and Montana, you might see some tent-like portable shelters, but you will also see plenty of folks hunkered around holes, sitting on upturned buckets or folding chairs, and wrapped in bulky outerwear to keep warm. Photo Courtesy of the Idaho Dept. of Fish & Game

To refresh my memory, I contacted Tom McGlashen of Tackle Tom’s in Cascade, Idaho, and asked for an update on ice fishing. Tom reminded me why I liked ice fishing so much.

“It can be very simple,” he stated. “As easy as holding a line with a worm on it and dropping it through the hole. But,” he added, “most people use the smaller ice fishing rods that are about two feet long, so you can stand closer to the hole and watch for subtle signs a fish is on.”

Ah, yes, you need holes for ice fishing! Today, power augers exist to drill holes in ice, but a good hand auger will make short work of relatively thin ice—say anything under 8 inches. A power auger is nice when ice thickens over the winter or when you want to fish more than one hole at a time. In Idaho, you can fish five holes simultaneously.

Ben Long of Whitefish, MT, said he started hard water fishing simply by stopping in at the local tackle shop. “I think my son, Aidan, and I left the store with under $50 in purchases to get us started,” he said. “And at first, I simply used a hatchet to whack holes in the ice, although we use a hand auger now.”

Long also recommended a plastic sled with sides to haul all your gear, including warm drinks and food—as well as something to put your fish in after you pull it out onto the ice.

Bait can be as simple as worms, night crawlers, maggots, wax worms, or commercial jigging lures. Basically, you simply jig or bob the line gently up and down, hoping to attract a hungry fish: it’s really just that easy.

In the Midwest, where ice fishing is hugely popular, anglers set up elaborate portable shelters, often on wheels, complete with heaters and comfortable chairs over their holes. In Idaho and Montana, you might see some tent-like portable shelters, but you will also see plenty of folks hunkered around holes, sitting on upturned buckets or folding chairs and wrapped in bulky outerwear to keep warm.

Staying warm is important, as is safety on the ice. Long wears ice cleats to keep from slipping, which are available at most outdoor stores and on-line.

“Wind is your real enemy out on the ice,” McGlashen said. “If you don’t have a shelter or some way to block the wind, you’re going to have either a short or uncomfortable day fishing. Die-hard ice fishermen often use portable shelters.”

Long said the extended Montana winters really make ice fishing an easy way to spend time outdoors with family and friends. “It’s something to get you outside, is way more fun than watching TV, and sometimes you end up with a great fish dinner, too!”

Long also cited how close to town many lakes and reservoirs are in Montana, making spur-of-the-moment outings a snap.

Both Long and McGlashen said perch fishing is the species most commonly found in winter, although some ice fishing spots are more known for having trout.

“Basically, I like catching fish,” explained Long. “Perch are easy to catch, plentiful in most Montana lakes and reservoirs, and are great to eat.” He and his son often visit Whitefish Lake and Flathead Lake for hard water fishing.

In Idaho, Cascade Lake is the number-one draw for yellow perch. McGlashen said In-Fisherman  magazine  touts  this  Idaho  reservoir as one of the top ice fishing spots in the country.

Cascade Lake has no daily limit on perch, but checking fishing regulations  is essential for every lake and reservoir in Idaho and Montana as there are no standard limits for perch or trout.

Idaho boasts several other popular places for hard water fishing. Horsethief Reservoir is easily accessible on the western side of the state and is known for good trout fishing. Depending on the winter, ice fishermen typically love C. J. Strike Reservoir near Boise, especially the Bruneau Arm of the lake. Little Camas Reservoir is popular for perch fishing, while Mackay Reservoir and Ririe Reservoir both offer kokanee or trout ice fishing. Check in with the nearest Fish and Game office about what lakes and reservoirs are “hot” during winter, and visit stores, like Tackle Tom’s, for the local low-down.

In Montana, Georgetown Lake near Anaconda at 6,000 feet has a long and productive season; Hyalite Reservoir south of Bozeman has Yellowstone cutthroat and brook trout; Fort Peck Lake in the eastern part of the state is famous for good walleye fishing; Canyon Ferry Lake near Helena draws folks who enjoy fishing for both walleye and trout; and Hebgen Lake west of Yellowstone National Park has an exceptionally long season and 15 miles of lake, to provide plenty of serenity as well as good fishing. And of course, Ben Long said good things about Whitefish Lake, and the bays along the shoreline of Flathead Lake, which both produce good perch fishing. Be aware that some lakes, like Flathead, may not freeze completely across their entire expanse, so be safe.

While fun, hard water fishing can be deadly if you misjudge the thickness of the ice. If it is at all questionable, stay off! Check the internet for tables on current ice thickness, or call a local sporting goods store. Be alert to areas that may look mushy after a thaw, especially in shallow, marshy areas. Don’t fish alone, and don’t take chances. Other than that, just enjoy the fun of hard water fishing!