Civilizing the West with Printing Presses 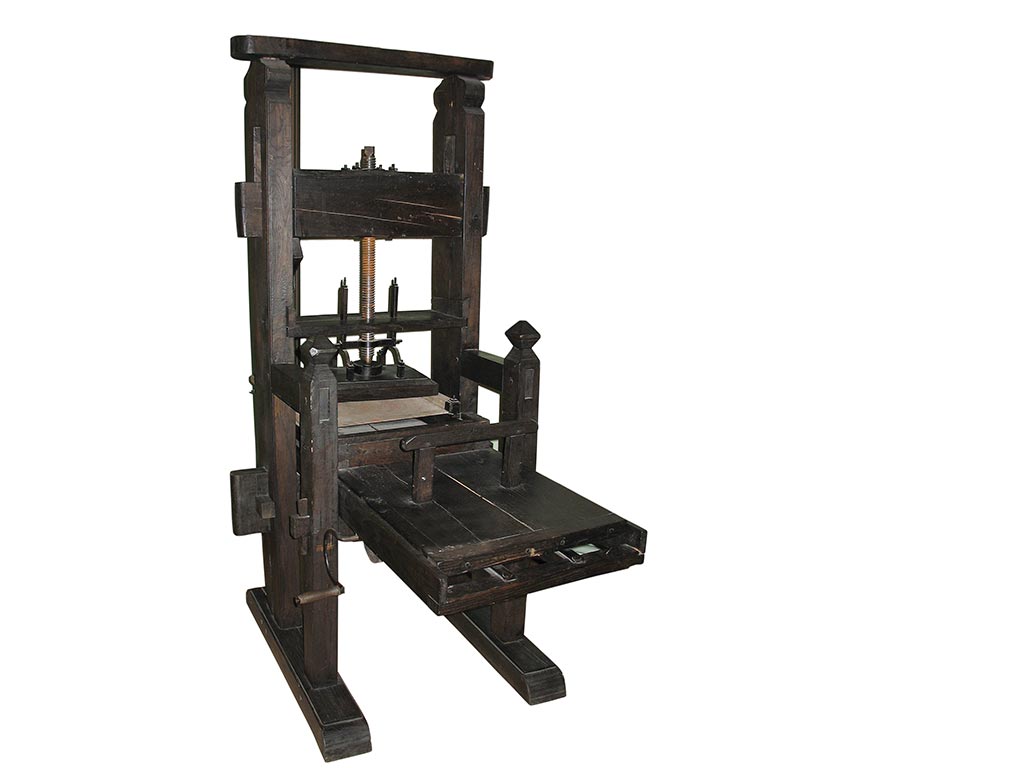 If you were to poll historians of technology, they would all point to the printing press as one of humankind’s most important inventions.

Some insightful wag once called printing “the art preservative of all arts,” which nicely sums up how important printing is to the production and spread of information, knowledge, and art.

It comes as no surprise, therefore, that the arrival of the first printing presses in frontier territory often marked the moment that the region passed into “civilization.”

By these measures, both Idaho and Montana, as western states, were late to the game: none of the western states had printing presses until the mid-19th century.

Thanks to some dedicated missionaries, Idaho was among the very first of the western states to enjoy the fruits of the printing press, as Marcus Whitman and Henry Spalding arranged for the delivery of the first press in 1839 to a mission on Lapwai creek—a machine that came from Hawaii, of all places. Only California, a coastal state, acquired the power of the press earlier, in 1831. Montana, by contrast, was the very last of all the states to get a working printing press—in 1863.

The arrival of the printing press to the Mountain West comes especially late in history when you consider that by 1539—300 years earlier—a printing house was established in what is now Mexico City. Printing did not begin in any of the territories now called the United States until 1638 when the famous Mrs. Glover founded what became the Harvard press in the Massachusetts Bay colony.

That means it took 200 years for the power of printing to spread from the East Coast to the Mountain West. Why did it take the mountain west so long to emerge from the illiterate frontier? For starters, neither Idaho nor Montana have ever been easy places to get to—in fact, they are still difficult to travel to from anywhere else in the country, as anyone ever stuck with a layover in the Salt Lake City airport can tell you.

Whitman and Spalding contracted with the Hudson’s Bay Company to have their press shipped from Hawaii, across the Pacific to the Columbia River, where it traveled by steamboat to Wallula. At that point, the press and its owners had to travel by canoe across eastern Washington to their mission at Lapwai Creek in Idaho, about 30 miles east of where Lewiston lies today.

The first press in Montana came from the opposite direction, the east, traveling overland from Colorado and arriving in Virginia City in the late fall of 1863—though the earliest printed artifacts it produced are dated from 1864.

Another press, under the direction of Francis Thompson, came up around the same time, having traveled by steamboat up the Missouri as far as Cow Island where the boat ran aground.

Thompson described the struggle to bring the press from the Missouri a hundred miles northeast of Helena across land all the way to Bannack, a trip that took more than three weeks and involved all but impassable roads.

At one point, Thompson had to lever out a wagon mired in mud using a 20-foot pole he fashioned from a nearby tree.

The whole tale is recounted in a memoir he wrote just before his death in 1910, called Tenderfoot in Montana: Reminiscences of The Gold Rush, The Vigilantes, And the Birth of Montana Territory, which was published in 2004 by the Montana Historical Society Press.

To compound the challenges of hard traveling over rugged terrain, printing presses in the 19th century were nothing like the desktop laser printers we all have sitting next to our computers today.

Even the simplest “cone” presses, designed mainly for printing field documents in military encampments weighed a couple hundred pounds. Their bulky, cast-iron design also made them unwieldy and hard to transport easily. (The first printing press in Montana was such a press, a Lowes model dating from the 1850s).

A more substantial foot-operated treadle press capable of turning out a small newspaper could weigh even more, from a few hundred pounds to more than a ton.

Many of the earlier territorial newspaper presses, however, were standing “hand presses,” almost identical to the sort of machine Benjamin Franklin used in his Philadelphia shop a century earlier, though his would have been made of wood.

Hand presses were massive iron machines, weighing in around a ton. They were developed in the 1820s and involved a long lever that the pressman pulled across his chest to push a flat iron plate down on top of the type, over which the newsprint was laid, one sheet at a time.

It was nearly impossible to transport a large platen press or a hand press across land without breaking it into pieces. Even then, most of the pieces would be too bulky and heavy to pack by horse or mule, which meant using a wagon. Wagons limited travel to established roads for the most part, and passable roads were few and far between in Idaho and Montana, even into in the 1850s and 60s. ISI