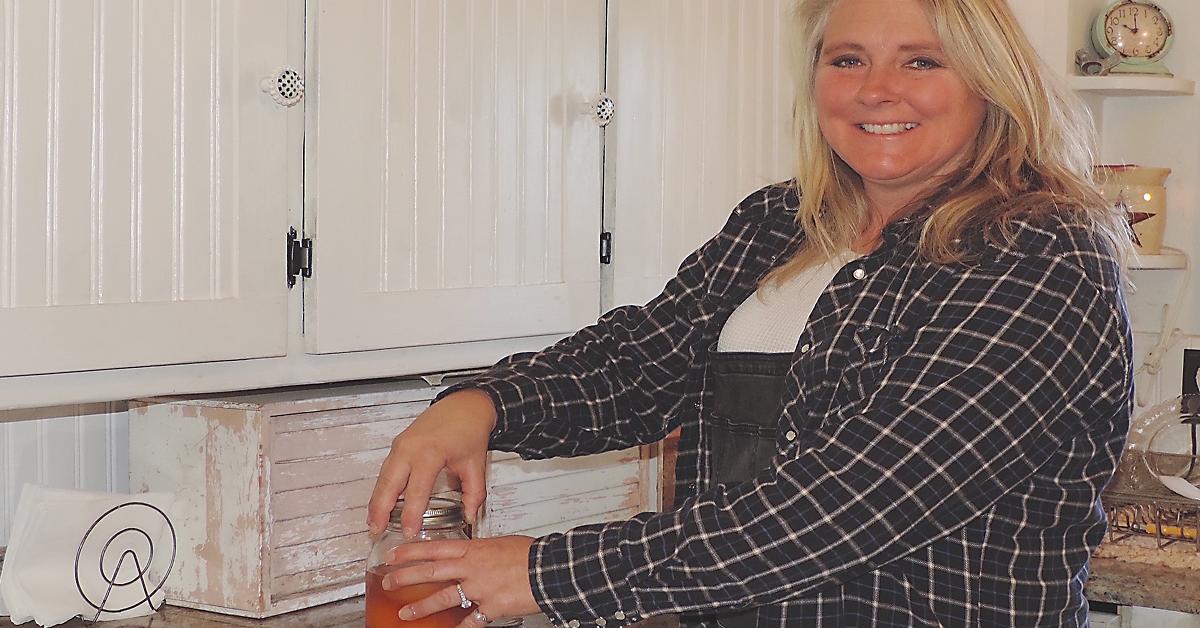 In her refurbished two-story farmhouse, Raegan Ricks suspended a gray, weathered wooden ladder from her kitchen ceiling as an inexpensive drying rack for her homegrown herbs.

Nearby was a weathered sliding barn door repurposed as a bedroom door. She decorated it with a piece of rusted metal she had bent into a heart shape. The headboard of a bed was once a wooden fence.

Ricks’ up-cycled, do-it-yourself home décor came from garage sales and thrift stores or was found in sheds on the small farm she and her husband, Rick, recently bought south of Malta in southeastern Idaho.

“I’ve always loved an old farmhouse style,” said Ricks, 53, who grew up on a small dairy farm near the Washington Coast.

Self-reliant and creative, she has always built much of what she needed wherever she and her husband have lived.

Soon after they were settled near Malta, she began rummaging through sheds and in the fields. She found an old weathered piece of farm equipment and transformed it into a coffee table.

Sometimes friends have given her a project. The buffet in their living room was in pieces.

“A friend gave me the top, back, and doors, and a leg was missing, too. I put it back together and covered it with chalk paint.”

Ricks shares her chalk paint recipe, mixing her homemade version for a fraction of the cost of chalk paint sold in stores. She credits her niece’s husband with figuring out ingredients and proportions.

“Mix five tablespoons of Plaster of Paris in a quart of flat white paint,” said Ricks, while painting a fireplace mantle in a bedroom. “It costs about $11 instead of $38 a can.”

Once the paint dries, it has a hard durable, smooth finish.

“It’s great. You don’t have to strip old paint or varnish from furniture or weathered wood. You just brush this on, and it makes your piece look like an antique.”

Ricks said she is glad to share inexpensive, do-it-yourself tips she has used to turn thrift store and garage sale castaways into attractive, vintage-home décor.

Before moving to Idaho, she and her husband lived in Lake Point, Utah, near Tooele, where she often bought what others considered junk, to refurbish it, and sell from her garage workshop.

She also had a small wedding catering and decorating business and built props and décor for the ceremony.

Her husband supports her furniture makeovers. During their 32-year marriage, they have remodeled several houses together, and Ricks has decorated them.

“We like older houses with character instead of new ones that look like they came out of the same cookie cutter,” said Rick, 57. “We laugh at ourselves, because it seems like once the fruit trees we planted are established and producing, we decide to move again because we’ve run out of projects.”

Rick said he enjoys the restoration work as much as his wife does.

“Neither of us are the type to sit around. Watching TV is a waste of time, and you can read for only so long,” he said. “I’ve always been a do-it-yourself kind of guy and have had more time than money.”

Their last home remodel before moving to Malta was a two-story red brick house built in 1906.

“The front room was once a post office,” she said. “We really liked living there and had an acre for a garden, a cow, turkeys, and chickens.”

They sold it in 2016 when Rick was hired to manage the Deseret Industries thrift store in Burley, and they found their cozy farmhouse near Malta.

Ricks then began to search for her next DIY projects at her husband’s work. He introduced her to the staff, laughing and warning them about her.

Wherever they live, Ricks cans, grinds her own wheat, grows a garden, and raises a milk cow and chickens. Jars filled with peaches, pickles, and other food line shelves in her kitchen.

“I needed shelving that would fit in this space, so I made my own from old weathered wood,” she said.

Their five children and five grandchildren never know what project the couple will be working on next.

Her most recent project was painting a fireplace mantle with the chalk paint. While letting it dry, she bustled to her next project. She picked fresh sage, oregano, and basil grown in pots and tied them in bunches to dry in the house.

Meanwhile, her husband arranged rocks in a decorative border near the front of their house.

“We love it here where you can see farmers and ranchers working and feeding the country,” he said. “It’s great to have elbow room.”

Eventually, the couple agrees they will finish their home improvement projects and start again, probably for the last time during retirement.

“We really like the Elba and Connor Creek area,” said Ricks. “We’ll either find a house or maybe build a new one for the first time—with a vintage farmhouse look of course.”