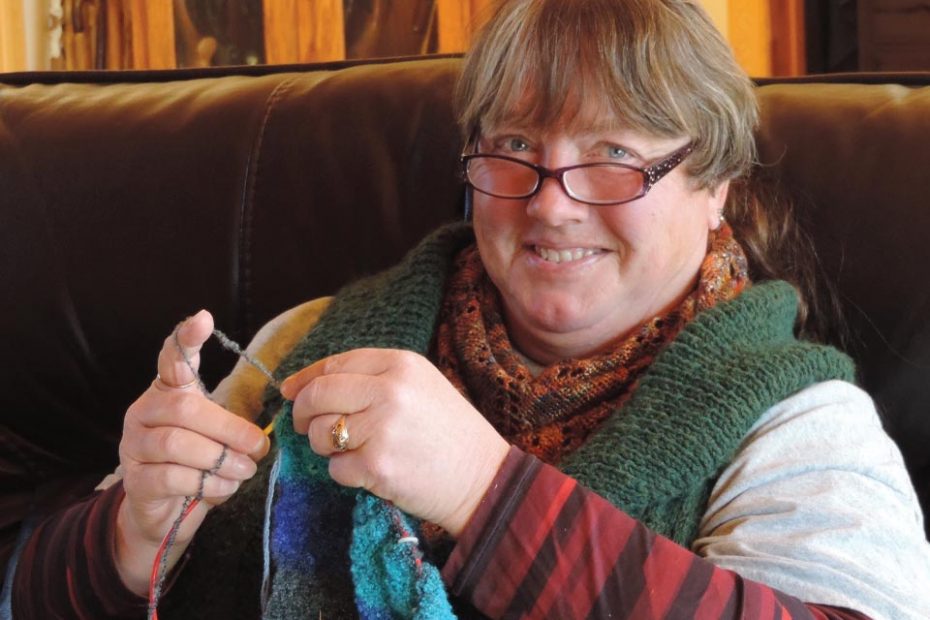 Holly Seefried jokes her late grandmother’s nudging across time compelled her to finish a half-century knitting project—a cherished sweater her grandchildren wear. She said it’s never too late to check off something on a to-do list.

“I must have been channeling Grandma a few years ago because I decided to start knitting,” said Seefried, who raises cattle with her husband, Bill, in central Idaho’s Lost River Valley. “When I was young, I remember my grandmother, Winnie, was always knitting.”

Like her grandmother, Seefried puts love and humor into whatever she knits for herself, her grandchildren, and her sons.

When her mother learned about her daughter’s new hobby, she provided her with the perfect project.

“Mom went through some boxes and found the sweater,” Seefried said. “It was partially off the needles, but the front and sleeves were done. She had started the sweater for me when I was about 3 years old. My grandmother also had a hand in knitting it, so it’s our three-generation project.”

The sweater was never completed because the family moved from British Columbia, Canada, to central California, then to Mackay, Idaho, because her dad was hired to work on ranches.

“Every time we moved, the unfinished sweater went with us,” Seefried said.

She still has the paper pattern for it and points out her childhood scribbles on it. The big flat piece of paper shows lambs and other animals, similar to a needlepoint pattern.

“It has notes on it in mom’s handwriting, and the pattern has been completely changed,” Seefried said.

To finish it, Seefried asked for help from her neighbor, Rulla Smith, an expert knitter.

“We spent several afternoons learning how to work the pattern and visiting,” Seefried said. “She was another set of hands contributing to the sweater. I’d get one step done and go back for the next part—cuffs and then collars. We laugh that this sweater took 50 years to finish.”

As she worked on it, Seefried joked she not only learned to knit, but, just as important, to “tink.”

“That’s the reverse of knitting—knit spelled backwards. Sometimes I have to take out all the wrong stitches I made.”

“When they outgrew it, it became clothes for their dolls,” Seefried said. “We have one more grandchild who’s 2 years old and will grow into it. I like to think whoever wears it is getting a big hug from everyone who worked on it.”

Seefried said the colors in the heirloom sweater are still vibrant, even though the yarn is a half-century old.

“It’s bright and ageless and never wears out,” she said. “I like to think the love in it will make it last a long time.”

“It’s a hat with a beard knitted to it, to keep your face warm in winter,” she said, showing a photo of her sons, Patrick and William, grinning beneath their unique headwear. “It was developed by a snowboarder.”

For Seefried, knitting is a creative way to spend an evening and to have a connection with her relatives.

“It makes you feel like you’ve accomplished something,” she said. “When I’m knitting, I think of Grandma and Mom knitting, too. One day I’ll see if my grandkids want to learn.” ISI