Wayne Melquist: Around the World for Wildlife

I originally met Wayne Melquist in the 1980s when we both worked for the Idaho Department of Fish and Game. I spent memorable times helping him band ospreys in and around Coeur d’Alene Lake. In the years since, he has traveled and researched a variety of animals and birds, many in foreign countries.

He’s had his share of hunting around the world as well, but even those trips included time for travel to better learn more about the wildlife and culture of these countries. It’s been a unique life, combining many interests and exploring nearly every corner of the globe.

Melquist was raised in Wisconsin, and, after a stint with the Marine Corps, he came to the University of Idaho in January of 1972. He was really into raptors, and Idaho had an osprey study underway.

Ospreys tend to nest on the tops of tree snags, utility poles and pilings, in or around water. This translates to taking a small boat with a 20-foot ladder, placing the ladder against an upright piling and climbing to the nest from the boat.

Before they used ladders to access nests, Melquist would use climbing spurs to climb to the nest. “It was pretty hairy climbing. I couldn’t do it now,” he laughed.

“A lot of times we had a bucket, put the birds in there, and lowered them down to band. Now we band them right there real quickly.”

These bands around the legs of young ospreys allow researchers to identify their migration routes and survival. Now, 40 some years later and 71 years old, Melquist continues his work with ospreys.

Among other results, the band returns have shown quite a range of places these Idaho birds spend the winter. It’s primarily Central America. Others have turned up in Mexico, South America, including Nicaragua, Honduras, and Costa Rica.

After finishing his master’s degree and working in the Birds of Prey Area south of Boise, he met with Dr. Maurice Hornocker to determine Melquist’s next step in wildlife research. Hornocker headed up the research unit at the U. of Idaho. When Maurice suggested a study of otters, Melquist responded “that’s something I could get into.”

They experimented with telemetry, where collars with electronic transmitters are placed on animals, and those signals could be picked up by researchers with receivers. They soon discovered the slender shape of otters required putting collars on very tightly, which wasn’t good for the animals.

Melquist then worked with a telemetry company to develop a small transmitter for river otters, where the transmitters were surgically implanted in the abdomen. According to Melquist, it’s the best method for otters and similar stream-lined species. He later used it to work with wolverines.

That led to a project in South America in 1982, to study four species of otters and seven species of spotted cats and the status of those animals throughout Central and South America.

Asked how many of those countries he worked in Melquist commented, “All of them.” That’s a huge area, impossible for an individual to cover thoroughly, so much of his time was spent working with others in the scientific community involved with similar work.

Melquist later headed up Idaho’s statewide non-game program in 1985, where he remained until state retirement in 2003.

He was in Argentina this past December and met with a biologist working with southern river otters, whom he had met in 1982 but hadn’t seen since. The result of this meeting may lead to a further study of these animals in Argentina, and Melquist has offered to help fund it and provide telemetry equipment.

He travels to hunt as well as learn about other people and wildlife, and that has taken him to many more countries. He’s taken hunting trips to Africa, including Namibia and South Africa.

“I’d usually combine a hunt with going sightseeing.” Another trip a few years ago didn’t include hunting. “I visited Rwanda and went on a gorilla trek. I’ve been in the Okavango Delta in Botswana. The flights are the expensive part, so you might as well travel around.”

But that’s just a start when it comes to travel. “I went to Iceland a year ago last fall. I’ve been to Scandinavia numerous times. I’ve also been to Costa Rica numerous times and Mexico many, many times and all over Europe.” Asked how many countries he’s visited he couldn’t come up with a total.

Malquest doesn’t know what the future holds in store in the way of travel.

He’d also like to visit Croatia and the Middle East.

“I’d like to see some Middle Eastern countries, which have such history. It’s unfortunate that now it’s just perilous to go.”

On a more local scale, he loves going to Canada, and, just last fall, he drove the Dempster Highway through the Yukon and Northwest Territory to the Beaufort Sea. One trip was to hunt musk ox on Victoria Island in Nunavut territory up in far northwest Canada, and he’s been to Alaska “many, many times.”

“It was a continent I hadn’t visited. The environment and uniquely adapted wildlife has always fascinated me, and I’ve been equally fascinated by earlier explorers.” He was able to see seven of the eight species of penguins that live there.

Bird life wasn’t very diverse due to the harsh environment, but some birds he saw were found nowhere else in the world.

For his next trip?  “We’re going on a river trip on the Danube and Rhine, a 15-day trip,” he said. “That’s on tap for next Christmas. It will be a different sort of thing; something I thought would be interesting. The markets will be fun to go to.” ISI 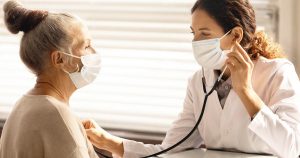