Wheeling on the White Rim Trail 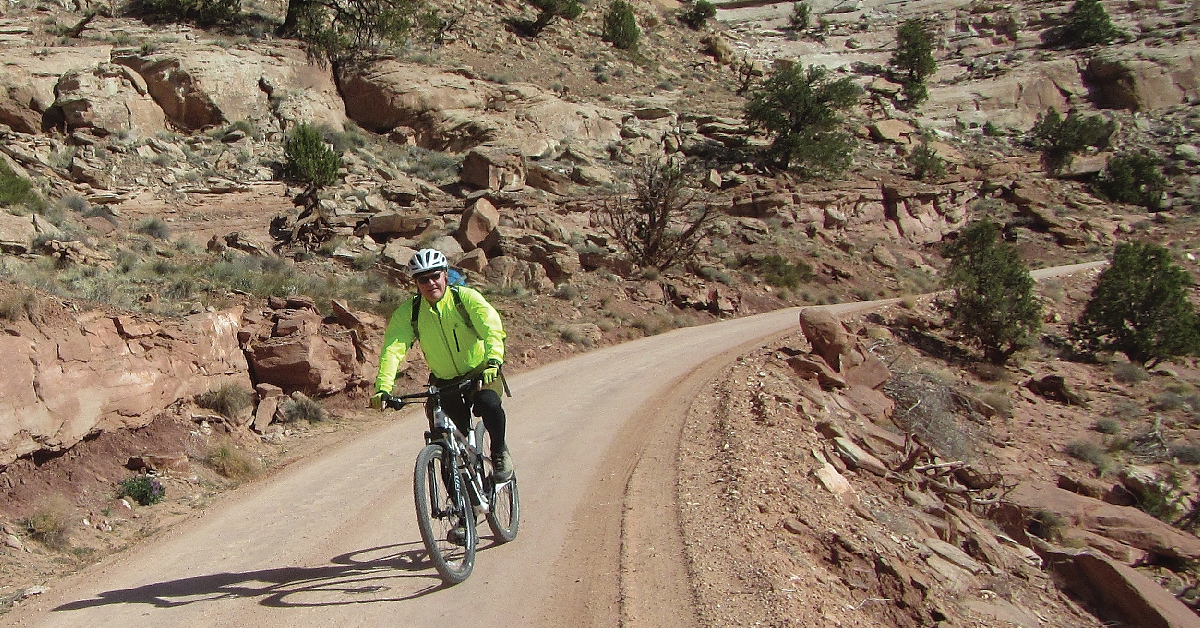 Deep in the Canyonlands National Park the White Rim Trail snakes along an extensive mesa. It’s located near Moab in southeast Utah, with views of distant canyons and two major rivers await adventurers at every turn.

It’s best to take three to five days to enjoy the expansive scenery. More time allows for camping and hiking. Mountain bikers in top physical condition and four-wheelers in a hurry complete the route in a day.

Fortunately for our group of five Idaho mountain bikers, three Boise friends with four-wheeler trucks joined us on our do-it-yourself camping trip.

“I always wanted to four-wheel drive the White Rim Trail, so this was a great opportunity to help friends by supporting the bike trip,” said Ken Taghon. Two Toyota trucks transported our food, camping gear, and 80 gallons of water.

Though known as a 100-mile trail, several roads comprise the White Rim Trail. A 76-mile section of dirt road within the Island in the Sky District of the park starts on the east side near the Visitor Center, traverses down the Shafer Trail Road, and then continues on the White Rim Road with the Colorado River to the east.

On the west side of the trail, the dirt road drops to the Green River. Some groups leave a shuttle and end the trip where the gravel Mineral Road switchbacks lead to the paved Utah State Route 313. The paved road leads back to the turnoff for the trip’s starting point near the Visitor Center. Travelers go in either direction along the route.

Helen Stroebel, of Moscow, Idaho, did the trail in April. “It was a fantastic experience because of pedaling that many miles and seeing that vast scenery up close and personal,” she said. Distant mountain ranges in view include the La Sals, Abajos, and Henrys.

There is no shortage of sensory stimulus. Rugged terrain jolts bodies, bikes, and vehicles. Along the dirt route atop and below the mesa, expect ledges, clay, and sand. Riders and drivers gaze at a parade of colors. Black manganese and reddish brown iron oxides —called desert varnish—streak the red-and-white banded sandstone. Rock towers glow orange at sunrise.

“A couple of places I had to stop the truck, get out, and look at what was over the ledge before dropping over it,” said Taghon.

Plants and animals manage to survive in this Great Basin Desert environment. At the east side of the park, Utah Juniper grow in the arid environment. Deer and bighorn sheep dine on blackbrush, a shrub common along the dirt road. At one point along the trail, we saw several desert bighorn grazing.

Spring and fall are the optimal seasons because the weather is more accommodating. Self-supported camping trips require a $30 backcountry permit and signing up for campsites as early as four months in advance. Campsites go quickly.

Arrive a day before your permit date for the mandatory check-in at the Visitor Center. The ranger issues the backcountry permit, provides current road conditions, and reviews important desert camping etiquette. If you don’t have a permit, they also issue last-minute permits available due to cancellations. Take some time to explore the paved road within the park that leads to overlooks with views of the rivers, distant mountain ranges, and trail.

Commercial companies offer an alternative to planning your own trip. They provide ease and adventure during one-day and multi-day trips.

Grab an opportunity this upcoming year to experience the endless remoteness of Canyonlands National Park via a scenic overlook or wheeling on the White Rim Trail.  ISI